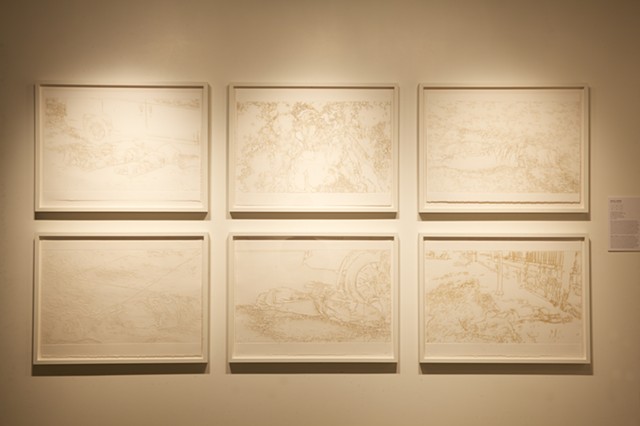 Miguel A. Aragón presents a series of burnt residue embossed prints on paper based on newspaper photographs of murders occurring in Ciudad Juárez, Mexico, a primary battleground in the violent war between rival cartels for control of the drug trade into the U.S.  Aragón’s works are created by printing laser-cut cardboard matrixes that he subsequently uses to transfer the image through embossing paper onto this surface. He draws a literal connection between the medium’s lack of ink or color to the absence of life, and how these incomprehensible acts of violence burn into the consciousness of an entire city.

As Aragón states, “I am exploring the idea of fragmenting a traumatic memory or image, as we would try to deal with the experience. I feel this is the reflection of Mexican society at the moment; we cannot avoid seeing these events but try to continue living a purposeful life; therefore, blurring, breaking up, and trying to erase those unwanted memories. Still, they will always linger since such traumatic events always leave an impression on us.”