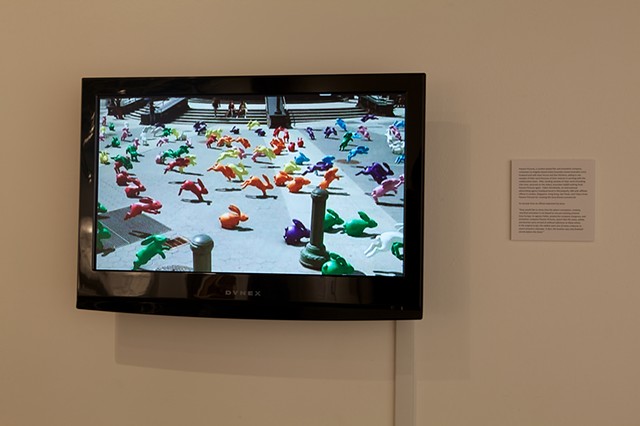 Passion Pictures, a London-based film and animation company, contacted Los Angeles-based artists kozyndan, husband and wife team Kozue and Dan Kitchens, asking to see samples of their work because of their interest in working with the collaborative team. After sending samples of their work (including USA-chan, pictured in next slide), kozyndan heard nothing from Passion Pictures again. Fallon Worldwide, an international advertisting agency headquartered in Minneapolis, MN with affiliate offices in London, Singapore, Hong Kong, Sao Paulo, and Tokyo hired Passion Pictures for creating this Sony Bravia commercial.

An excerpt from an official statement by Sony:

“Sony would like to stress that the advert conception, creative, and final animation is not based on any pre-existing artwork. Sony Europe, its agency Fallon, production company Gorgeous, and animation company Passion Pictures, assert that the wave, whale, and bunnies were arrived at without reference to these artists. In the original script, the rabbits were one of many creatures to cavort around a cityscape. In fact, the location was only finalized shortly before the shoot.”