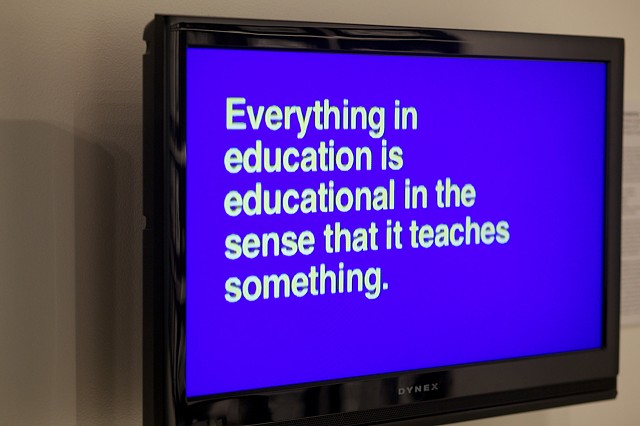 In her current research around debt, Thornton began to study it as a material. This investigation brought her to look at the large-scale steel works by famed sculptor Richard Serra. This new interest in Serra's work shed different light on an activist video he produced in 1973, entitled Television Delivers People, a clear and simple description of popular mass media as an instrument of social control. The relationship Serra proposes in the video places the viewer of TV as the consumed, and the advertising corporation as the consumer. Thornton replaces select language from Serra’s original work to recontextualize the video’s message to critique education as an instrument of subordination through debt control.

The amount of money Americans owe on student loans recently exceeded the nation's credit card debt. The National Center for Education Statistics reports that two thirds of all college students have student loan debt after graduation. Cumulatively over the past five years, college students have borrowed an average of $19 billion per year. Students transform capital into profit when interest and penalties are added to a principle loan. Student loans (federal and private) are the only type of loan that cannot be discharged through bankruptcy, and the Truth in Lending Act, which requires full disclosure of terms and costs associated with borrowing from lenders, does not apply to student loans.