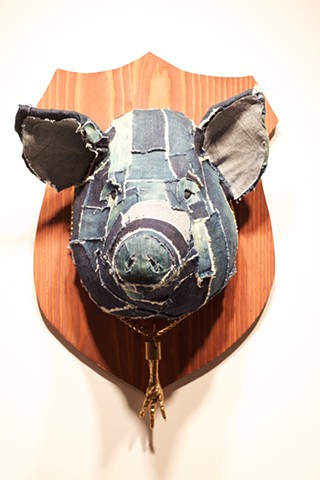 Pablo Cristi looks at the contemporary food movement of Nose to Tail, a culinary practice where the entire animal is utilized for dishes. Evident in growing trends in culinary exploration is an echo of the continued hegemony that has influenced Western ideas of “discovery and exploration” since ancient times. Pioneering chefs exploring in this direction commonly borrow ideas, ingredients, and processes from traditional cultural culinary practices and re-contextualize them in a more palatable way for audiences that sometimes perceive this reinvention of traditional practices as more sophisticated. Fetishized animal parts that once were disposable in the U.S., but fairly common in Latino and Asian cultures such as heart, feet, and tripe, are now exoticized and revered for their usage, hence the pig head and chicken claw.

The use of denim and gold reference the long history of exploitation of indigo and gold in Asia and Latin America. It also serves as a thread that recalls California history, specifically that of the Bay Area. Denim has multiple meanings, as it can refer to labor and utilitarian usage, but today can be seen as referencing hipster style and identity correlating with these new food movements.