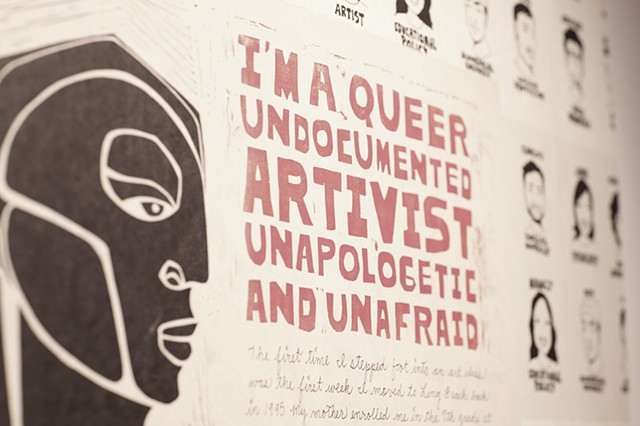 "While President Obama's new administration in 2009 offered an exciting set of opportunities around immigration reform, the political climate for immigrants is spiraling out of control. In Obama’s first year of office, 400,000 people were deported, more than any single year of the Bush administration. This means that immigrants are being deported at a rate of 1,000 a day. Some of the most affected by these policies are youth who were brought here when they were children, and are now in their teens or early adulthood. This age group of the undocumented community often call themselves "DREAMers."   The word “DREAMers” evolved from a 10-year legislative fight to pass a piece of legislation known as the DREAM Act, which would allow undocumented youth who were brought to this country at a young age the opportunity to earn legal status if they met certain conditions, including attending college or joining the military. The DREAM Act was first introduced in 2001 and has since gone through various modifications that decrease its impact while placing an emphasis on military service.   In the 10 years since the DREAM Act was introduced, a powerful youth immigrant social movement had emerged, led by undocumented students themselves who often declare that they are "Undocumented and Unafraid," shocking even their allies in the pro-migrant field. This bold and courageous rejection of the term "illegal" has created an unstoppable force of undocumented youth organizers, who today, lead coordinated campaigns around the country to secure rights of all immigrants.   For nearly 5 years, I've been following and supporting DREAMers around the country and making art about their challenges and victories. This piece contains the stories of undocumented youth and their support, disillusion, and at times, rejection of the DREAM Act. My linoleum block prints focus on the stories of three undocumented students: Prerna Lal, Julio Salgado, and an anonymous Oakand high school student. The videos also profile undocumented students, predominantly from California. The video in which youth "come out" as undocumented exemplifies the power of the DREAMer identity.   Along the way in my art-making, I met Julio Salgado, a undocumented, queer, artist activist who, using his comic-book style approach, would draw portraits of his undocumented peers and their key organizing moments, whether they were being arrested in the White House or conducting a hunger strike. While Julio did attend college, he cannot legally work because he is undocumented.  I was so inspired by his story, that he became one of the centerpieces of this installation. The cartoon figures in the background of the wall pieces are Julio's drawings of undocumented youth and the careers they would want to pursue if they had the ability to become a legalized.   I am honored to be able to share these powerful stories with you. To learn more about how you can urge President Obama to halt the deportations of immigrant youth, visit the following websites: UnitedWeDream.org; DreamActivist.org; Presente.org; DreamersAdrift.com. Special thanks to Julio Salgado for his dozens of cartoons, to Jesus Iñiguez for his video contributions, and Reed Rickert for his video editing. - Favianna Rodriguez