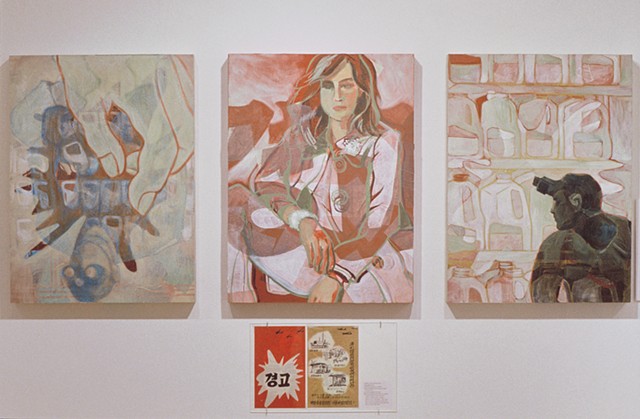 "PSYOPS imagery isn’t subtle. It targets our most basic fears (death, harm) and desires (family, security, sex). In our intensely visual, media-saturated culture, I'm interested in subtlety. I don’t have ties to the Middle East or the military; my focus is on exploring subtle, everyday images potent to the American civilian psyche.

I'm particularly interested in images that are not likely conjured when considering America at war. The subtext of these images are:

• America as a military superpower; • America whose power affords a tremendous amount of privilege and security, despite the overwhelming culture of fear we live in.

Inspired by PSYOPS, I aim to investigate notions of security, fear, privilege, the invisible / the unknown and science / superstition. There are three main images / myths / characters I employ:

First, Sam Fisher is a fictional character created by Tom Clancy and established in pop culture through the video game Splinter Cell. As a lone operative in a top-secret intelligence-gathering initiative, Fisher is a lethal, invisible ghost, who uses stealth, technology and firepower to help dismantle terrorist networks. He’s a perfect icon of a lone wolf, an anti-hero, an outsider among the group-oriented military. To me, Fisher’s enormous popularity can symbolize Americans’ acclimation to US-sponsored covert action / military intervention. Moreover, Fisher – the specter, the shadow – signifies the unknown, the unseen manipulation executed by the powers that be, or perhaps a spot (of guilt or transgression?) on our collective unconsciousness.

Second, a dairy case filled with gallons of milk is a seemingly innocuous image: common and bland, milk itself symbolizes innocence. I wanted to work with this image because I sense that the current war is ‘invisible’ to many civilian Americans. We can afford to go about our daily business non-plussed – free of rations, famine, and widespread sickness. I suppose that the image of a depleted dairy case in emergency situations – whether war, riot or hurricane – has the potential to cause panic or despair. That a filled dairy case seems banal speaks to our tremendous privilege and security.

Third, I wanted to investigate what dignity and civility looks like in America at war. Though our lives seem impervious to war, most of us have internalized many tiny, horrific visuals from the War in Iraq. What impact do these visuals have on our psyches beyond immediate visceral reactions? It’s been said that Southern hospitality emerged as an negation to the dehumanization of slavery – what images of civility are emerging today?

As Presidential politics have influenced cultural trends lately, I became fascinated and disgusted with this fall’s Kennedy-esque fashions: tweeds, wools, equestrian boots, wavy brunettes. I interpret these images as Ivy-league, old money, dignified, diplomatic – a psychological reaction to and denial of our hand in the brutality of war." - Christine Wong