Proposition: The ocean level will rise three meters/ten feet by the year 2107. What are your concerns, questions and new propositions?

Description of the Project: The Agents of Change impulse that is gradually manifesting in the world is calling for new forms of seeing and understanding. People have the potential to embody this impulse and enable its manifestation in the world. The Agents of Change project is a call to all humans who wish to activate their ability to manifest this impulse in the world through shaping new ways of seeing and understanding that are required for this impulse to grow into its full transformative potential. The Agents of Change “vessel” is an open framework that each person can use for their own research, of themselves, of the environment, and of the people they meet, as part of a local collective and a global process in shaping a new mode of consciousness. Agents of Change is a ‘vessel’ which provides a thought space in which we can develop thought with regard to being a ‘transformative social organism’ (Joseph Beuys) through realizing the value of our agency of change. Being conscious of our agency of change opens the potential for realizing new ways of working as individuals and as a social organism.

The Agents of Change ‘vessel’ is developed in such a way that all of its elements are strategies of engagement. The ‘vessel’ enables an ‘experiential mode of awareness’ through deep collective aesthetic, valuable human exchanges and active engagement. Through this methodology it enables the unconscious ‘image’ of our Agency of Change to become a conscious experience and develop a sense of position and ‘ability to respond’ (Shelley Sacks) in the ecological crises, as a meaningful way of being. "Goethe’s scientific consciousness is inside out to what we expect, because it is to be found in the way of seeing and not in the factual content of what is seen…seeing - the organization or unity of the world…what organization and unity mean turns out to depend on the mode of consciousness." (Bortoft 1996:34)

Description of the Process: Three Stages
First stage is opening the discussion and engaging with deep listening and preparations for using the kit. Second stage is the intervention occurring in public spaces, along rivers and oceans. Third stage is a reflection on the experiences and thoughts that came about during the previous two stages and shaping the next steps.

Agents of Change Kit: Agents of Change has a mobile kit, which can be used by different groups of up to ten people. The kits are made up of life jacket vests (worn by each person), three meter high water measurement sticks (indicating the level of the ocean in 2107), and a small journal.

Method of Public Intervention: Each Agent of Change stands alongside the ocean to form a line. The tops of the measurement sticks form a dotted line in the sky that indicates the new 3m height of the ocean level in 2107. Each Agent of Change stands quietly and has time to experience and take note of their thoughts in this mode. They use the journal to document the reflections they have on their own experience.
When a person from the general public is drawn to the Agent and begins to inquire, the Agent introduces him/herself. The Agent then speaks from their experience in this mode of being an Agent of Change, rather than trying to recall facts and figures about climate change. They can ask the public what they think the project is about, and this continues to open up the conversation. The kit and conversation process provides a space for valuable human exchange to emerge through a process of listening and reflecting. The Agent shares his/her concerns and questions with the person as an invitation for the person to share their concerns, questions and new propositions, in response.
The journal is then used for documenting/mapping key issues emerging from the conversation.

The “conversation maps” make “thought forms” visual. The “thought forms” are not lost, because of the map, in the progression of the discussion. The Agent encourages re-engaging with the thought forms so that deeper resources can be excavated.
A “check” is made out with the person’s questions, concerns or proposed propositions as the value of the check. The Agent hands the check to the person. The check serves as documentation of the value of the exchange and as a strategy for the person to re-engage with their questions, concerns, and new proposed propositions.This method of entering the “wound’’ (Joseph Beuys) explores the potential of awakening our Knowing (the unique transformative quality emerging from all human beings) as the generator of our sense of ‘response–ability’ (Shelley Sacks).

About the Social Sculpture Research Unit: The Agents of Change project was developed collaboratively in 2006 and 2007 by practice-based researcher James Reed and the Director of the Social Sculpture Research Unit (SSRU) Shelley Sacks at Oxford Brookes University, U.K., as a creative initiative of Earth Agenda. Agents of Change embodies methodologies developed by James Reed and Shelley Sacks, giving form to aspects of the kind of work the SSRU is engaged with. James Reed is the project leader and facilitator of the Agents of Change project. www.social-sculpture.org 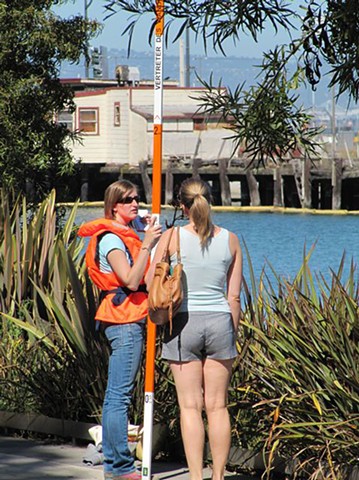