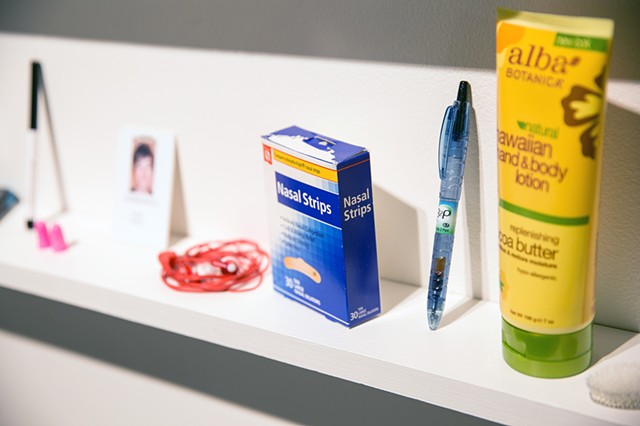 Where Almost Everything I Used, Wore, Ate or Bought on Monday, April 1, 2013 (That Had a Label) Was Manufactured, to the Best of My Knowledge, 2013 Interactive webpage and installation

Parameters and exceptions: “I looked up everything that I could find that had a label. Things that had no label or no indication of origin (such as the shower handles in my bathroom, or the salad greens in my lunch) are not included here. Obviously it is often hard to draw a distinction between manufacturing and sourcing, and in some cases distribution. I tried as hard as I could to locate the actual site of manufacturing, but included information about sourcing when it was freely given (the Pyrenees down in the comforter) or when sourcing information seemed inextricable from the finished product (i.e. food products like juice and coffee beans). Also, I am a human being, so there are things that I have missed. Some of this information may be inaccurate, though I tried as hard as I could to make it accurate. In the end, this is meant less as a fact sheet than a meditation on our relationships to things, and the geographically schizophrenic path we trace through their use.

I chose to use product photos and photos taken by others rather than my own in order to highlight the alienation that occurs when one realizes that all of his or her possessions were not only made by strangers far away, but are still afloat and available in the marketplace – e.g. that an old teapot you've had for years has brand-new shiny cousins waiting to be ordered online, or that a wooden dolphin you bought at a flea market in a far away city (your most prized possession) is still being made by Chinese factory workers who also make wooden snakes, wooden sharks, and wooden pigs. To me, a product photo (and, to a lesser extent, amateur eBay product photos) of your own possession is interesting in so far as the product photo is clean and lit from all sides, while yours may be dirty, chipped, or lost amid a pile of papers. The distance between these two can be analogous to the physical distance between the place of production and the place of consumption.” – Jenny Odell