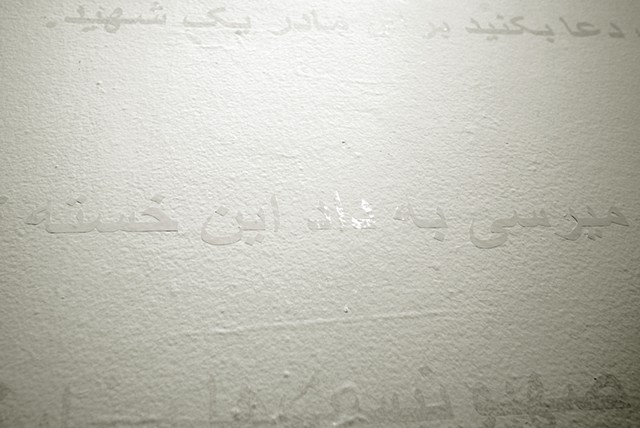 Nima Alizadeh This is Tehran, Voice of Islamic Republic of Iran, 2009 Audio installation (corner speakers on ceiling) & vinyl (throughout the room)

"This is an audio project, captured from different radio programs of the Islamic Republic of Iran before and after the 10th presidential election. Various recorded pieces (from the news, cultural programs, kids’ programs, and…particularly religious ones) represent virtual audio atmosphere occupying our lives at home, at work, in vehicles, etc. and they can be heard or even not be heard. The hegemonic utters of the 24-hour Radio Tehran illustrate the reminiscence of cultural mingles, especially for Iranian immigrants who have been away for a long time." - Nima Alizadeh

The Persian script on the walls are excerpts taken directly from the artist's audio project, snippets of what can be heard on the different radio programs of Iran. Here are some of the translations of these excerpts:

- Homeland signifies bravery, dignity, target and martyrdom. - Iran is awaiting your return. - If God takes back, he takes back, if God gives back, he gives back. - Honor, abjectness, and power are in God's hand. - Accept yourself as a divine blessing. - Mankind needs religion. - There is no absolute freedom. - We are going to show our strong fist to the world. - Say prayers for a martyr's mother. - The 12th Imam is more gracious than thousand mothers. - Iran's destiny is in your hands. - The Koran is the leading book. - We are one of the main powers in the world. - Muslim brothers and Muslim sisters! Oppose the enemy! Victory is close! - Future is in our hands. - Here is the kiblah of righteous men. - When there is cruelty, there is fighting, when there is fighting, we are there with God's blessing. - We can have a green, breathing, and settled city. - Another truthful salute to the revolution. - We wish your prayers in these extraordinary days, will be received by God. - War is inevitable. - The anti- Islamic film "Submission" was screened at the U.S. Congress. - The level of trust of Americans to their government has reached a historical low.  - I believe we will be one of the most powerful countries in the world in the next few years. - I have no weapon except for tears. - In the U.S. one pays a high price for criticizing the Zionist regime. - The president introduced Iran as the hope of all people of the world. - A large portion of the younger generation do not know how to pray. - 5 million Iranians live outside the country. - They are tearing apart our brothers and sisters. - Oh Humanity! Where are thee? Why have you turned your back? - Till the end of this year, 90 million will be added to the poor of the world. - Tomorrow, Iraq cities will be empty of American weapons. - The president, while declaring the death of Neda as suspicious, demanded an investigation of the murder.  - Tonight the calls of Allah o Akbar for the Supreme leader Khamenei will fill the skies of the city. - 7,000 fake degrees from the University of Hawaii were confiscated. - Youth have weak motivations for marriage - We hope that the enemy will remain angry seeing these long lines for voting. - Emam Zaman (mahdi) is kinder than thousands of mothers. - 20% of our population suffers from insomnia. - Give up one meal a month and give to one in need. - Hashemi Hashemi, God be with you. - If you can forgive yourself, you can forgive everyone. - Learn to love without condition. - Call of prayer on the skylines of Tehran - We say decisively that we have no plans to build nuclear weapons. - Europeans lose the opportunity to invest in Iran every year. - We are being sacrificed for this oil. - Our artists expect us to support them. - There are many enemies awaiting a chance to crush us. - The US has set its traps for Iran. - Prayer will give one's body immunity and reduce mental problems. - The United States Mint launched the first ever coin with an image of an African American.