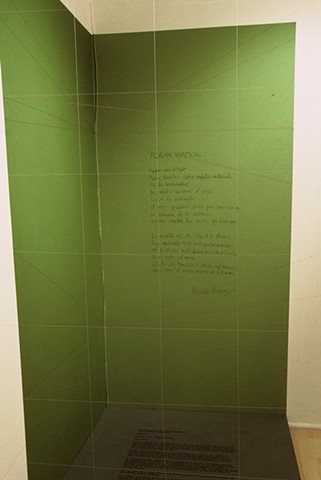 Text on wall - translation from Spanish

I make a hole To look for a buried word. If I find it, The word will close the hole. If I do not find it, The hole will remain open forever in my voice. The search for the buried supposes to adapt to the failed emptiness. Death is another thread of the weave. There are moments in which it could penetrate un us with the same easiness of the thread of life or the thread of love. The thread, then, would complete itself, almost tenderly As if we, ourselves, would weave it.

Text on platform - translation from Spanish

The access with vehicles was through Moreno Street entering an open patio. There was an office communicated, internally with another one. There was an old, slow, iron bared structure elevator that would reach the third floor: the detention area. In this floor there were two parts conforming the building: in one area there were seven offices, a room and a bathroom. Two of the offices had red ceramic tiles.

The other part of the building could be accessed through a metal door leading to a corridor. From there would follow another wider corridor separating each other by a door. To the right an iron bared door led to a big collective cell “leonera/lion-area” with only one bathroom and two sinks, two toilets and, separated, a shower.

In the same corridor, always towards the right wall, a door led to a large room where five “tubos/tubes” would confront four other ones and a bathroom, similar to the one already described with the addition of two urinals. At the end of this corridor it would become wider towards the left. There, an iron-bared door would open towards a space where two long windows, located high, overlooked an inner airy aperture between the two buildings.

In this place, there were five other “tubos/tubes” and one bathroom, similar to the ones described, that instead of having two small sinks it had a single large one.

The “tubos/tubes” were cells of 2 x 1 m. The floor was grey, the ceiling was high and it had a glass tile of 10 x 10 cm. The walls were green, with blood -stains and nail scratches, a metal door with the lock towards the outside. Above that door there was a light bulb that was only lit when the count of the detainees was conducted. Otherwise, the cell remained dark permanently.