For the past 30 years, Kamler has manifested his practice of art engaged in worldly affairs through sculpture, installation, public art, teaching, community collaborations, performance, and public interventions. His many projects around the issue of prisons include The Sound of Lions Roaring (1992, in the Bay surrounding San Quentin State Prison), Oh Give Me A Home Where The Buffalo Roam (San Francisco Jail #3, San Bruno, CA), and Table of Voices (1994-96, Alcatraz Island).

These one-pound sheet lead scrolls are from Kamler's The Waiting Room installation project (1999-2001) that explored the complex issue of capital punishment. The texts are taken from language commonly found on the inside of prisons, detailing security procedures for visitors, family, and friends entering prison grounds to see an inmate. 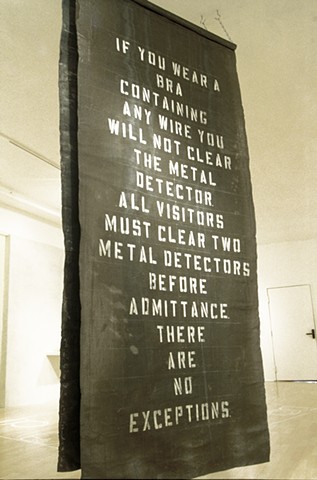