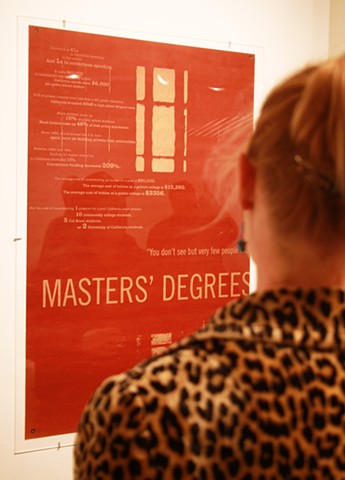 The All Of Us Or None (AOUON) Archive project began in 1977 to gather and document the poster-work of modern progressive movements in the United States. Though earlier work is included, its focus is on the domestic political poster renaissance, which began in 1965 and continues to this day. The Archive gathers posters from all streams of progressive activity - from movements of protest, liberation, and affirmative action, trade-union and community struggles, to electoral and environmental organizing, community services, and visionary manifestos. Since 1965, the domestic political poster renaissance has generated over 400,000 designs in a diverse and decentralized productive process emanating from every focus of progressive activity. By late 2007, the Archive had salvaged over 24,000 designs from this domestic flow; and had long since become, with the Center for the Study of Political Graphics in L.A., one of the two major repositories of this work. The Archive's curator is Michael Rossman, a Berkeley writer and social historian.

This poster was produced around the time of California Proposition 21, known also as Prop 21, a proposition proposed and passed in 2000 that increased a variety of criminal penalties for crimes committed by youth and incorporated many youth offenders into the adult criminal justice system. Not too much has dramatically changed in the past 8 years, as California still ranks first in the nation in corrections spending. Educational costs have risen, and currently the average cost of tuition at a private college is $23,712 in California, the average cost of tuition at a public college is $6,185. With 2008 figures, for the cost of incarcerating a single prisoner for a year, California could educate: 57 Community college students, 10 Cal State Students or 4 University of California students.