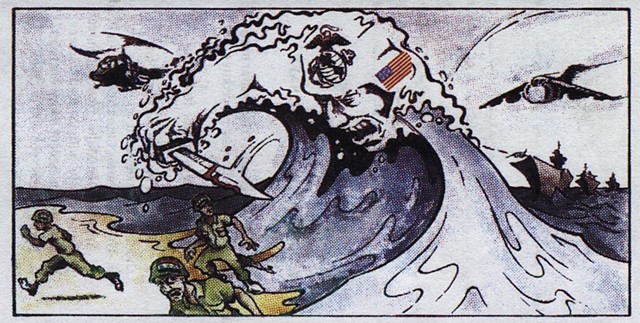 Leaflet: Tidal Wave of Marines (C20) (front), 1991 Language: Arabic Production Source: U.S. military Target Audience: Iraqi military within Kuwait (Gulf War) Front: Image Back: Arabic text with English translation Remarks: 12,000 copies of this leaflet were placed in sealed bottles and dumped off the Kuwait coastline by a smuggler from the United Arab Emirates. Launched just days before the ground war, this leaflet played on the Iraqi fear of an amphibious attack by the United States. As a result, this leaflet is credited with convincing the Iraqis to reorient their defenses in the wrong direction against Kuwait's coastline. In actuality, the allied attack came from the south and west along Iraq's border with Saudi Arabia.