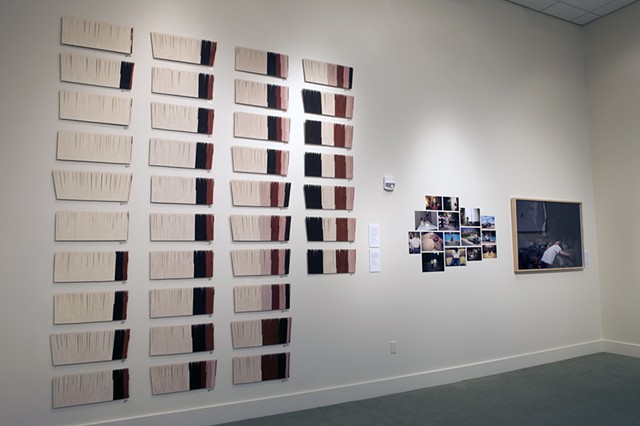 Arthur Huang (on left side) My Life As A Chinese-American So Far (36 Years and Counting), 2009 Acrylic on chopsticks

"My Life as a Chinese American So Far (36 Years and Counting) in the Present Tense exhibition has its root in a collaborative project The Threads of the California Department of Corrections and Rehabilitation that I completed in 2008. That project contemplated issues beyond the personal realm and used statistics beyond my consumer habits in my studio practice. With My Life as a Chinese American So Far (36 Years and Counting), I am interested in merging my daily life with broader statistical information. In this piece, I have collected census data of different ethnicities from all the cities that I have lived in for each year from 1972 to 2008. The percentages of each ethnicity are painted as representative skin tones on chopstick mats composed of one hundred chopsticks with each chopstick representing one percent. I have depicted Caucasians, African Americans, Latino Americans, Native Americans, Chinese-Americans and other Asian-Americans. Chinese-Americans are represented with the pale lavender color." - Arthur Huang