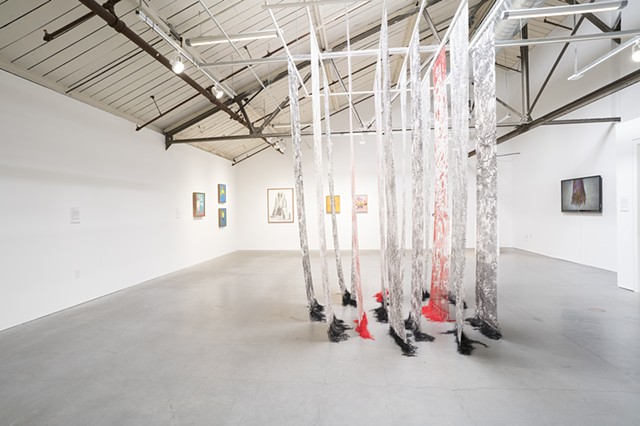 Having printed the work on foldable and transportable silk organza, for Karimi, the notion of carrying gardens of medicinal plants that can be instantly opened and viewed emphasizes the importance of remaining connected to the healing properties of nature. Inspired by original plant images from The Herbal of al- Ghafiqi, a prominent 12th Century medicinal botanical manuscript, this installation evokes memories of Karimi’s childhood in Shiraz, Iran, where herbal med- icine has been a prominent tradition since the medieval period. Spending time in both traditional drugstores and gardens of Shiraz with her grandmother, Karimi was deeply influenced by the deep belief in the healing powers of herbal medicine and the importance of staying connected to the natural world. During the Revolution of 1979, protests interrupted Karimi’s idyllic life and caused occasional shutdowns of her elementary school. During a rushed evacuation, Karimi was seriously injured, her blood staining the classroom floor. Having printed the black and white floral patterns at Kala Institute in 2017, Karimi now adds fabric strips of red tulips (symbols of martyrdom in Iran) and blood stains to reveal how a pleasant childhood in Iran became interrupted and “stained” by the Revolution of 1979.