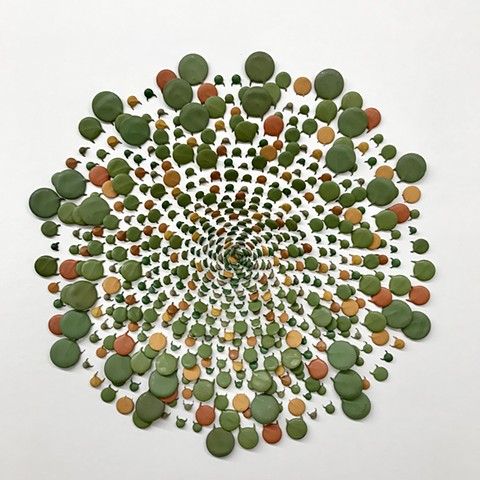 Fabian’s current body of work consists of sculptures and works on paper made with resistors, capacitors, and diodes — the candy-colored components found on circuit boards. Ubiquitous in electronic devices and intrinsic to the industry that thrives in Silicon Valley, these kinds of resistors and capacitors have their limitations in an industry that seeks to get smaller, sleeker, and faster; are they on an edge of technological extinction? In using these components in a way that references ancient crafts of basketry or textiles, Fabian comments upon the slowness of her process in opposition to the immediacy, technological advancement, and “progress” that these materials allegedly provide. The Ghalamkari series specifically looks at the Isfahani copper trays after which the series is named. Fabian grew up with them adorning her family’s home and was always drawn to the intricately carved and hammered designs. This series is inspired by their delicate designs and radial symmetry.