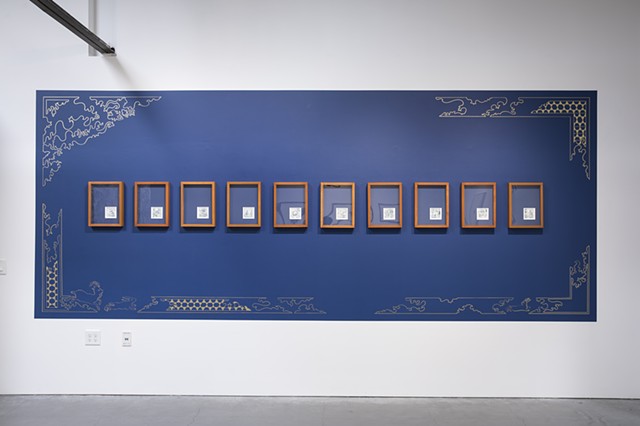 During the Safavid Dynasty, which ruled the Persian Empire from 1501 to 1722, the most talented and skilled artists were working at the Royal Atelier, creating some of the most outstanding manuscripts of the era. The manuscripts of Shahnameh of Shah Tahmasp and The Canticle of The Birds became the inspiration for the body of work currently on view. As an etcher working with precise lines and a high level of accuracy, Golbanou personally relates to the incredible miniaturists, gilders, and bookbinders that once upon a time worked at the royal workshops. During a residency in New York City, she had the chance to study the original manuscripts at the Metropolitan Museum of Art. In this series, she took out some of the animals depicted on the borders of the manuscripts, personalized them, and gave them a chance to become the centerpiece. The story of each frame is unique and created from her imagination. The off-centered placement of the image in the frames is also inspired by the avant-garde layout of the manuscripts. The frame holds the borders, the borders contain the paper, and the paper contains the story that was originally etched into a copper plate.