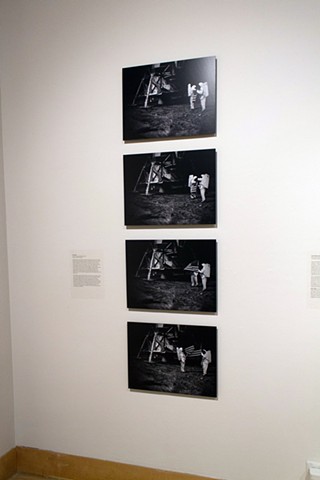 In 2006, NASA announced that the original high-resolution tapes of the 1969 Apollo 11 moon landing were missing (The footage of the event that viewers had seen broadcast on television that year had been filmed from a video monitor at Houston’s mission control, screening the live transmission from the spacecraft). In 2007 at Ocean Beach in San Francisco, Kildall recreated a 1-minute segment of the lost moon landing footage – the scene where astronauts Neil Armstrong and Buzz Aldrin planted the American flag onto the moon’s surface, with the lunar lander in the background. Kildall’s piece emphasizes technology’s ability to create beyond pure replication and augmentation and calls to question the impact and importance of data in today’s dynamic world. These four images are stills from the 2007 video of the same name.