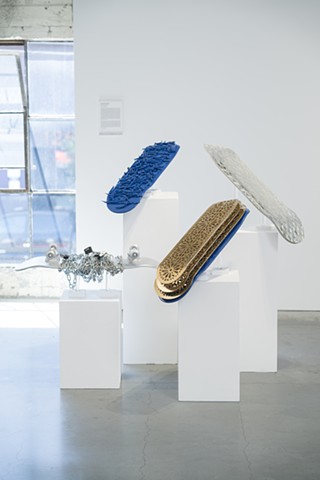 Coming of age in Iran in the late 1990s and early 2000s, like many of his peers, Shovir began to connect with the world outside of Iran through slow-speed internet and satellite, gaining access to information about art, sports, music, and global politics that heretofore was difficult to obtain. As an art student in Iran, he was eager to learn about everything he could get access to, and with friends began to create opportunities through social media with other young artists to gather and exchange knowledge and information about skateboarding and punk music, while simultaneously cultivating awareness as political and cultural artist-activists. Utilizing the means of street art (stickers, spray paint, paste-ups) to position larger concerns in the public sphere such as the government’s role in the war and child labor practices, Shovir and his peers were frequently arrested and accused of being spies and organizing against the Iranian government. This installation is an homage to that time and a reminder of the power young people — in Iran or the US or anywhere else — have to spark cultural, political, and social change.