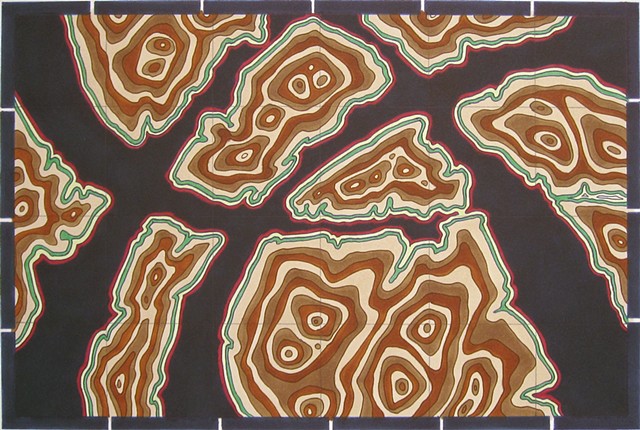 “Appropriation has always been at the core of my work, but more specifically it is the appropriation of the visual language of cartography that drives the aesthetic. These works are from a larger series called "Small Drawings.” Using a constant size, 10" x 14", basic patterns and compositions found throughout my work are isolated and reconfigured revealing a visual alphabet. Typical cartographic tropes such as proportion, scale, and text are either eliminated or manipulated. So much of the "information" is taken out that formal issues start to arise. The colors that are expected from a map, blue equals water, brown equals desert, green equals vegetation, are now stripped of their map origins and take on new roles. Black can now mean water, pink can mean desert, and yellow can mean forest. The proposal is an unequivocal exchange of meanings. The semiotics behind cartography now have an interchangeable set of signifiers that depend wholly on the context in which it is set in. Formally, the perception of color parallels this interchangeability.

‘The Map is Not the Territory,’ is a quote from Alfred Korzybski. Arising from the linguistic assumptions of general semantics, this quote encapsulates the limits of language and symbols. The map is indeed not the territory. The map is not the land. The map is not the people. The map, through this series, speaks more about the nature of language, the interchangeability of symbols and meanings, and the natural biases we have when looking at a visual language such as this through the utility we are used to expect from a map.” – Lordy Rodriguez