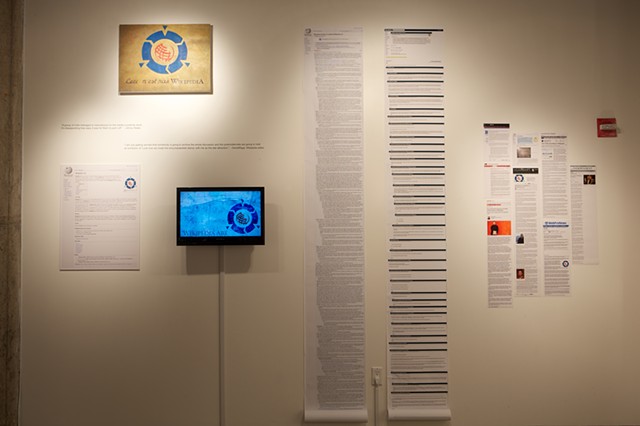 In February 2009, Kildall & Stern created a Wikipedia article called "Wikipedia Art” that was simultaneously a self-referential performance art piece called Wikipedia Art.  This collaborative project was originally intended to be art composed on Wikipedia, and thus art that anyone can edit.  Since the work itself manifested as a conventional Wikipedia page, would-be art editors were required to follow Wikipedia’s enforced standards of quality and verifiability; any changes to the art had to be published on, and cited from, “credible” external sources: interviews, blogs, or articles in “trustworthy” media institutions, which would birth and then slowly transform what the work is and does and means simply through their writing and talking about it.

Although Kildall & Stern encouraged editors to strictly follow Wikipedia guidelines in contributing to the page, Wikipedia editors determined its intent was nonetheless in violation of site rules, and it was deleted within 15 hours of its initial posting. A month later, Kildall & Stern received a letter from a law firm representing the Wikimedia Foundation, claiming the domain name, wikipediaart.org, infringed on their trademark. The resulting controversy received a lot of international coverage, including an article in The Wall Street Journal, all of which helped to continue to transform what the work is and does simply through their writing and talking about it. Mary Louise Schumacher of The Milwaukee Journal Sentinel compared the incident to the “outrage inspired by Marcel Duchamp’s urinal or Andy Warhol’s Brillo Boxes.”

Wikipedia Art has since been included in the Internet Pavilion of the Venice Biennale for 2009. In 2011 it appeared in a revised form at the Transmediale festival in Berlin, where it was an award finalist.  Kildall & Stern present the whole dialogue and controversy surrounding their project, calling attention to issues of infringement and creative license.