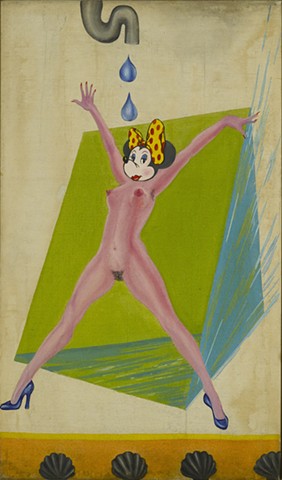 Margaret Harrison Women of the world unite you have nothing to lose but cheesecake, 1969-70/2010 Claria print (original acrylic on linen in Arts Council Collection South Bank Centre London, U.K.)

This was the precursor of the series of works on paper first shown in 1971, at the Motif Editions Gallery in London; the first overt feminist one person show in Britain. The title reflects the activism and notions of collectivism of feminism, post the events of 1968. The work is in the Arts Council of England collection, as is Harrison’s other famous feminist work Rape (1976).