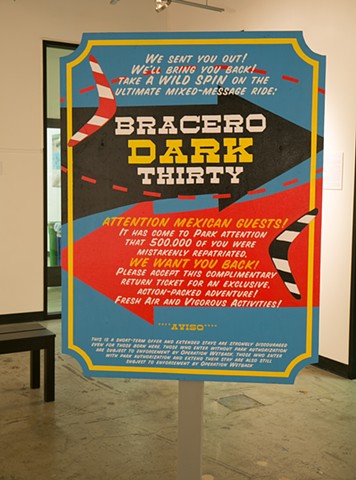 BRACERO DARK THIRTY In the 1930s, during the Great Depression, more than 500,000 Mexican Americans were deported or pressured to leave, during the Mexican Repatriation. However, when labor demand returned with World War II, there were few Mexican Americans available. The Bracero Program (from Spanish bracero: "manual laborer") was therefore initiated in 1942 to import temporary contract laborers from Mexico to the U.S. The program began with the U.S. government bringing in a few hundred experienced Mexican agricultural to harvest sugar beets in the Stockton, CA area. The program soon spread to cover most of the U.S. agricultural labor market. There was also a railroad bracero program that initially supplied U.S. railroads with unskilled workers for railroad track maintenance and eventually covered other unskilled and skilled labor. By 1945, the quota for the agricultural program was more than 75,000 braceros working in the U.S. railroad system and 50,000 braceros working in U.S. agriculture at any one time. The railroad program ended with the conclusion of World War II in 1945. At the behest of U.S. growers, who claimed ongoing labor shortages, the program was extended under a number of acts of congress until 1948. The program in agriculture was justified in the U.S. largely as an alternative to illegal immigration and was seen as a complement to efforts to deport undocumented immigrants such as Operation Wetback, under which 1,075,168 Mexicans were deported in 1954. The workers who participated in the Bracero Program generated significant local and international struggles challenging the U.S. and Mexican governments to identify and return 10% mandatory deductions taken from their pay from 1942 to 1948, for savings accounts that they were legally guaranteed to receive upon their return to Mexico at the conclusion of their contracts. It is estimated that, with interest accumulated, $500 million is owed to ex-braceros, who continue to fight to receive the money owed to them.