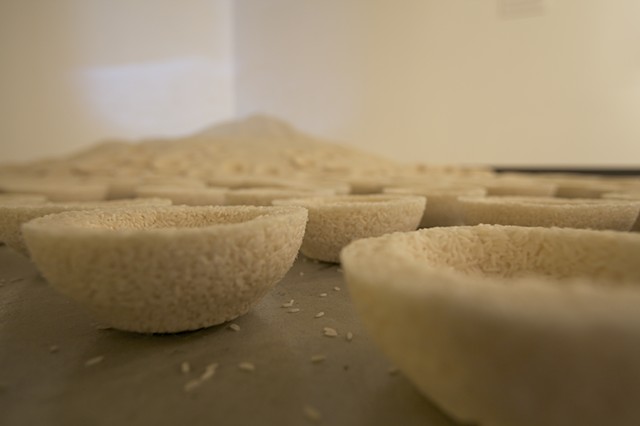 "In 2007/2008 world prices for food and grain peaked, creating a hunger crisis in over thirty countries that depend on rice as a staple food. Severe desperation led to riots. I became aware of the crisis through media images on the riots. The images haunted me, but I felt the blame was misplaced on the victims and not the cause.

Eric Holt-Gimnez of the think tank Food First reports that last year there were record amounts of food grown and produced, enough to feed the world one and half times its needs. Instead, there were record levels of starvation…and record profit for agribusiness.

How does this happen? Through free trade agreements, the World Trade Order and lending practices of the World Monetary Fund, agribusiness corporations profit from a practice known as “dumping.” Dumping is when one country’s heavily subsidized food product is imported by another country for less than what they can grow it themselves. For example, 30 years ago, Haiti grew all it’s own rice. Because U.S. farmers are so heavily subsidized by government funding, they can grow rice at a fraction of the real cost. After free trade agreements, it became cheaper for Haiti to import rice from the U.S. than to grow it themselves. Until….market manipulations increased the price of rice to what most people could not afford. But a dependency has been established as little or no rice is being farmed in Haiti. What’s most devastating to me beyond the immediate hunger crisis, is that very soon, in a generation or two, no one in Haiti will remember how to grow rice.

The installation: As I researched the food crisis, I was devastated by images from worldfocus.org. The poorest of Haiti’s poor eat a special kind of clay, a practice known as geophagy. The dirt patties are mixed with oil and salt or sugar and baked dry in the sun. I was spellbound by the volume, pattern and mass repetition of the dirt patties. It strongly influenced the shape and form of this installation.

The bowls are empty…sculpted with rice to express the hunger as a result of “dumping.” The rice is available and abundant, but barely accessible to those who depend on it. Each bowl is made with five servings of rice, what many families survive with on a daily basis. The split screen video shows the same video, one plays forward, the other in reverse. The affect: the rice is being extracted from on side to the other, methodically, systematically over and over. There’s no reciprocity, only loss.